Wild camping is always something we have been passionate about, coming from the bonnie lands of Scotland. However, it would be Italy that we spend our first ever night sleeping rough, under the stars, with a story to remember! This is the story of possibly the wackiest 48hrs (YET!) of our European Adventure. This is our Bari to Patras Ferry Fiasco! 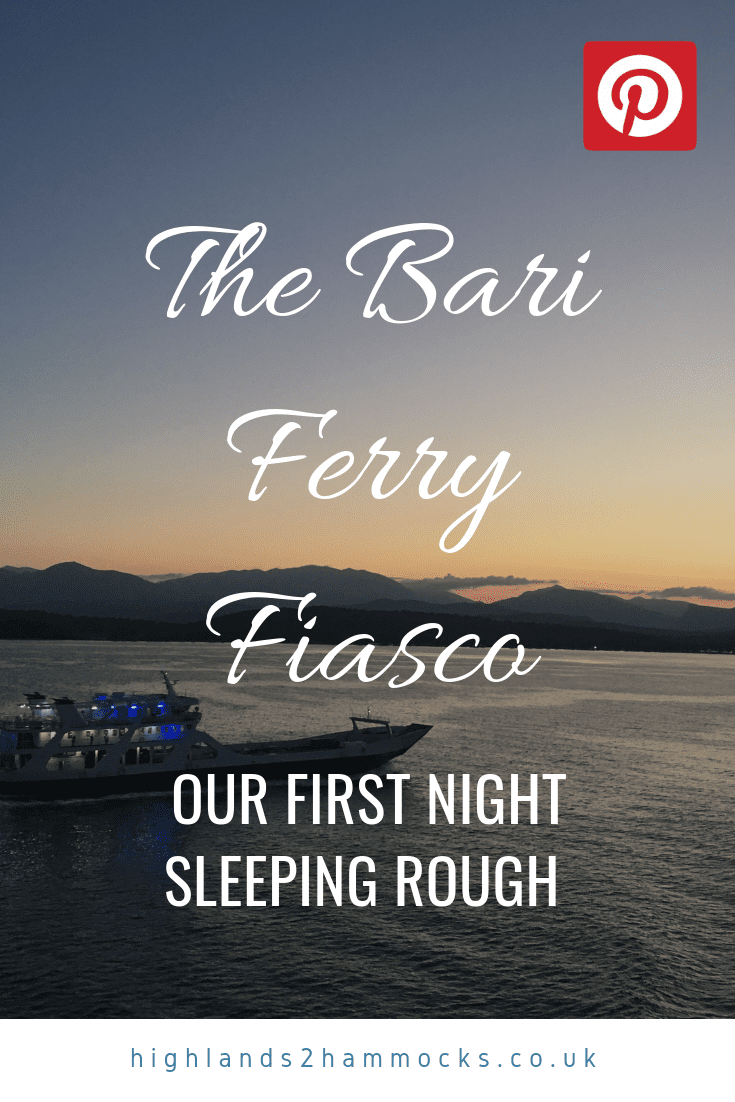 It all started when we arrived in Bari, weary from our 700km cycling adventure down Italy’s eastern coast to the southern region of Puglia, excited to cross the sea to Greece. We decided to spend 4 days in Bari to unwind, recharge and get ready for our voyage. The first drama we encountered was in booking the ferry itself. After hours of searching the internet for a contact number, we finally got through to a very helpful Greek assistant who helped us book the ferry. After about 10 minutes of discussing the multiple ways of spelling “Campbell”, we finally got the booking finalised and paid for.   We would be leaving on the Tuesday at midnight, for an overnight crossing to Patras, time to relax and enjoy the sunshine! The next day we checked out of our apartment, stocked up on snacks for the ferry and headed to the beach to enjoy our last day. During this time, something was itching my brain about the booking. It just didn’t seem right! So, I checked online for the ferry timetable and our fears were confirmed. The scheduled time was indeed not midnight, but half past 7 in the evening. We threw the bags together and raced to the ferry port!

For the sake of this story, it is important to mention that on the Monday before our scheduled sailing there was a planned strike for all ferries of the company we were sailing with. We arrived at the ferry terminal, ready to board the half 7 ferry and excited at the prospects of an earlier arrival in Greece. As soon as we entered the terminal our hearts sank. The lack of ferry workers was as obvious as the look of despair on the present passengers faces. Upon speaking to a fellow Brit, we found out that the strike had been extended last minute another 24hrs and there would be no sailing tonight. Oh dear.. With no ferry out of Italy, no accommodation for the night and no clue what to do, any sensible traveller would have started panicking right about now! 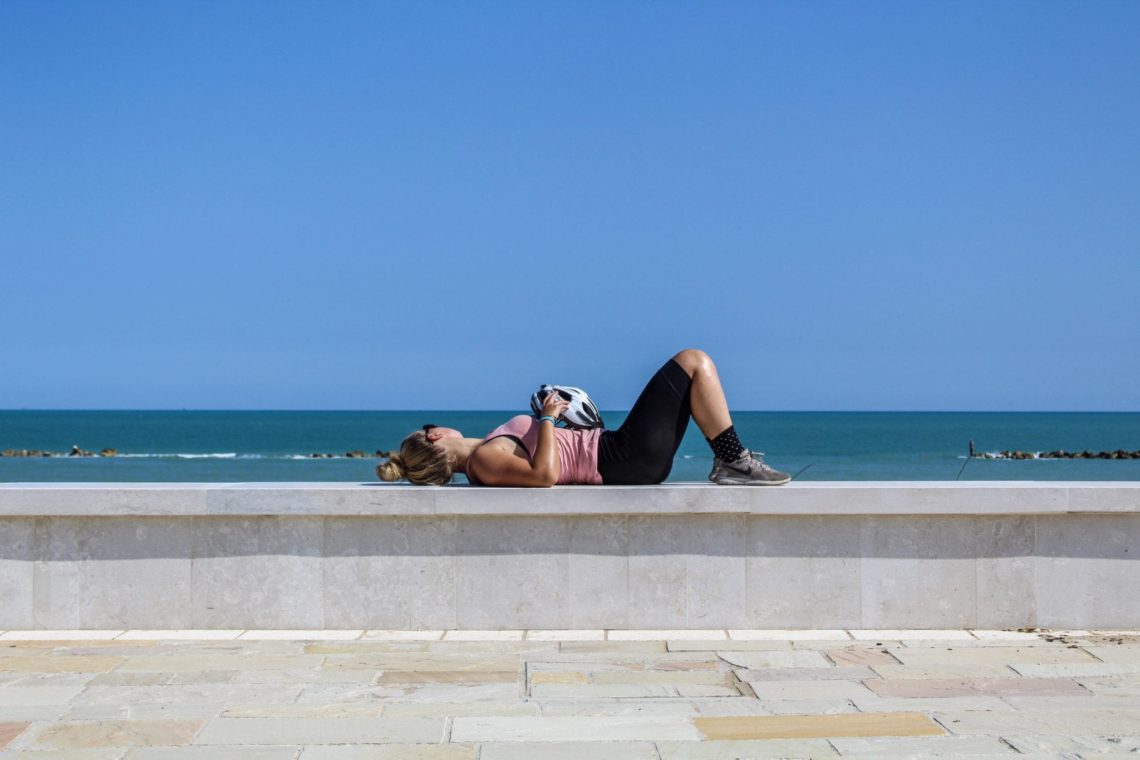 Every Cloud and Silver Linings

As we left the terminal, pale faced and unsure of what comes next, the friendliest and most light-hearted jest came our way from a fellow cyclist, sitting outside the terminal. “Looks like it will be a night under the stars for us then!” The familiar, English accent was a very welcome sound at this very minute, and we chatted for a while about the situation and what our stories were. It turns out, this wacky pensioner was on a retirement celebration tour from England to Greece, and was in the same boat as us (excuse the pun..). The other Brit from inside joined us and we all joked about the prospect of being homeless for the night. With plenty to talk about, we decided to make the most of the night and catch up with our fellow bicycle explorer over some drinks and dinner. We chatted for hours about where we had been, what we were doing, what was next and enjoyed the incredible stories we had to share. It turned out our drinking buddy was not only one of the most eccentric pensioner we had ever met, he was also a fellow blogger! Dr Matt Ellis (drmattellis.blogspot.com) was on a mission to share the awe-inspiring stories that he has collected throughout his life of community paediatrician work throughout the world, beginning with his journey from England to Greece. What a character! During our hours of chatting and drinking, we were fascinated by his stories of wild camping across Europe, most of which involved hiding from farmers and early morning dips in lakes. This gave us an idea. “Let’s try out this bivvying idea and sleep by the ferry terminal for the night!” Full of excitement (and a little liquid courage..) we raced to the ferry terminal before it shut its gates, ready to sneak back in for the night. Through the gates without a second glance from the security guard, we realised the security in this part of the world was slightly more relaxed than in the UK. Time for bed! We found a quiet spot behind an office building and set up our beds for the night. Nice quiet night now I guess? Well for us anyway, Matt just HAD to get back into town for “one more beer”, so off he went. Not to return it would turn out.. 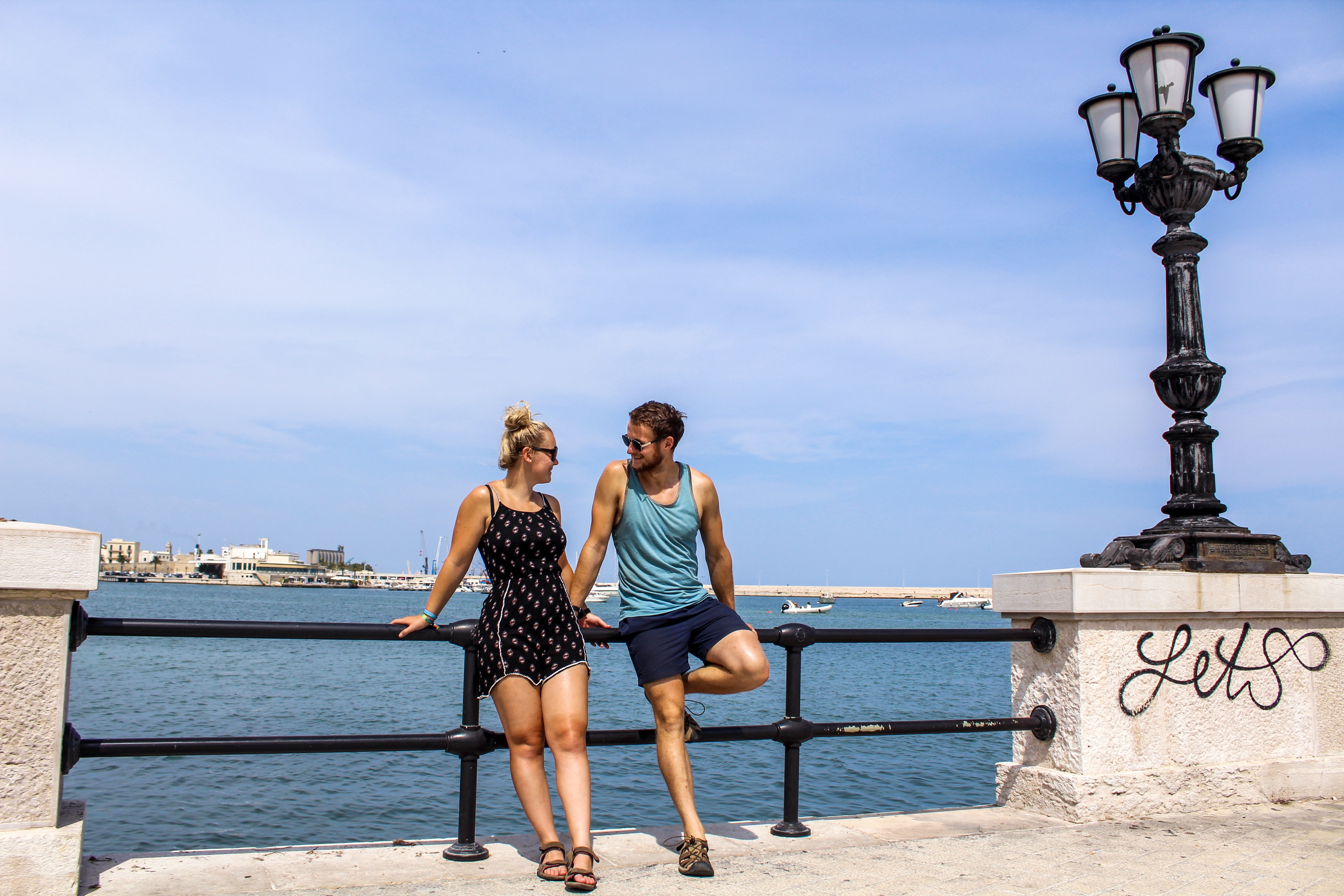 Early next morning, as the birds began to sing and the sky tinged with the daily incredulity of the Italian sunrise, we got up and packed away. Lorries would start arriving soon and we didn’t want to catch anyone off guard, lurking in the bushes.. The elephant in the room (or outside the terminal in this case) was the lack of a Dr. Matt to be found. It would later turn out that the gates of the port indeed close at some point of the night, leaving Matt stranded outside, forced to camp on the patch of grass beside the port instead. What a sight for the locals, a tent pitched on one of the only green spaces of the city. A bowl of cereal and a strong coffee later, we were the first to arrive (strangely enough) at the ticket desk to pray that they would decide to work today. SUCCESS! The ferries are on and ours would leaving at 1930 that night. Time to spend one more day in beautiful Bari. 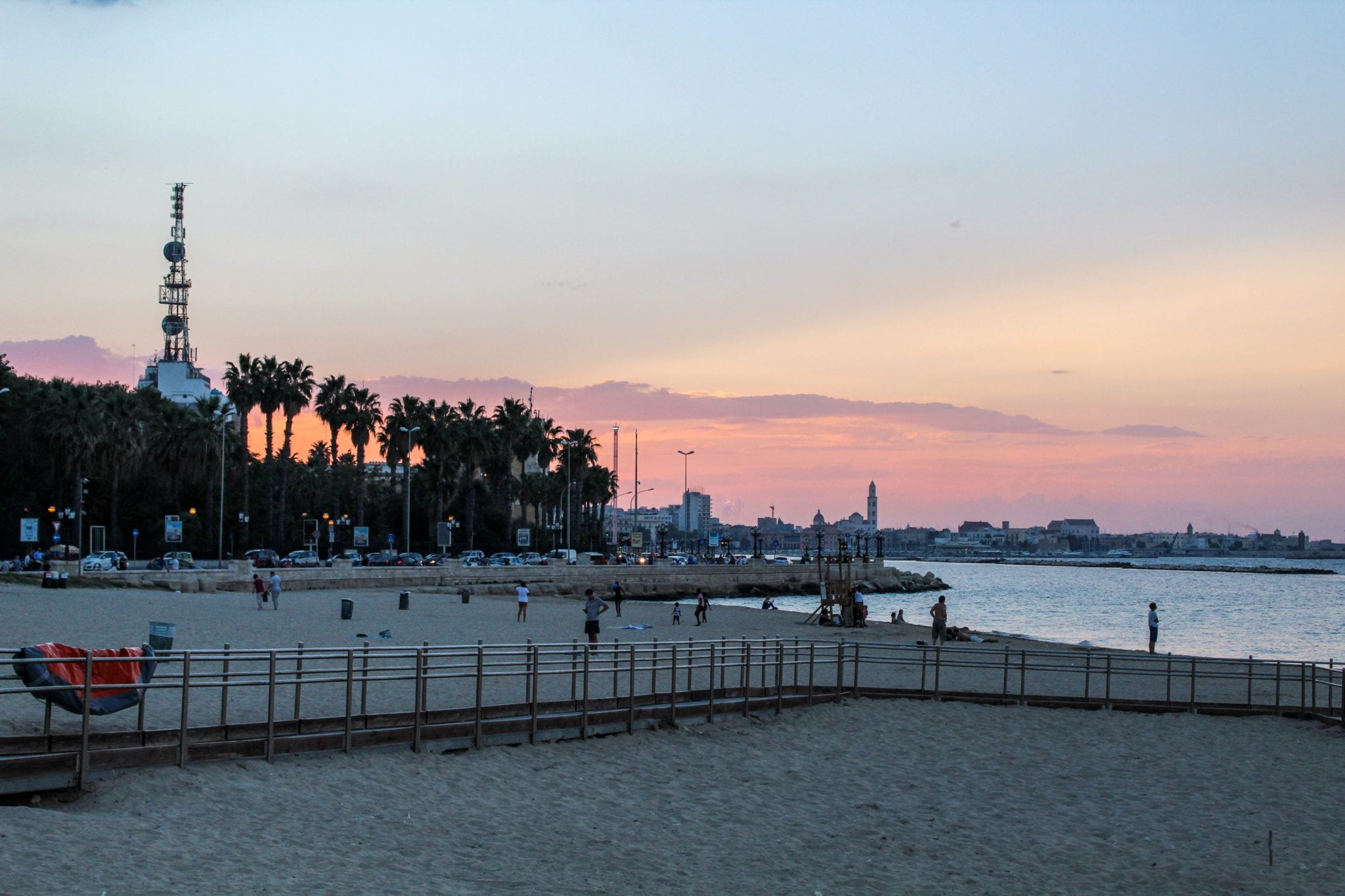 After a full day in the town (too many chocolate croissants, too much sun and not enough coffee), we were back at the ferry ready to get on our way to Greece. All aboard and a quick embarkation, we began our final southward leg of our journey. With our eyes truly open to the potential of our belongings, we were feeling optimistic about the quality of sleep that night would bring. Sleeping bag, a roll mat and a pillow are all you need to sleep sound anywhere! As we chilled below deck, we met up with Mad Matt once again, who informed us that a Dutch couple had set their tent up above deck. JACKPOT! We raced above to scope out the best spot for our home for the night. It was good to be back inside a shelter. What a night this turned out to be..

Blown Across the Sea

As it turns out, pitching a tent on a ferry does not produce a calming, quiet night under the stars. Combined with the Adriatic winds sweeping across the sea, the speed of the ferry created a blustery, unpredictable and very noise night’s sleep. Still it has got to be said, this sleep was still a lot more comfortable than it would have been below deck. After a pretty broken, yet very refreshing 7-hour sleep, we woke up just in time to drink in yet another treat for the eyes. I swear the sunrises on our trip just get better and better! 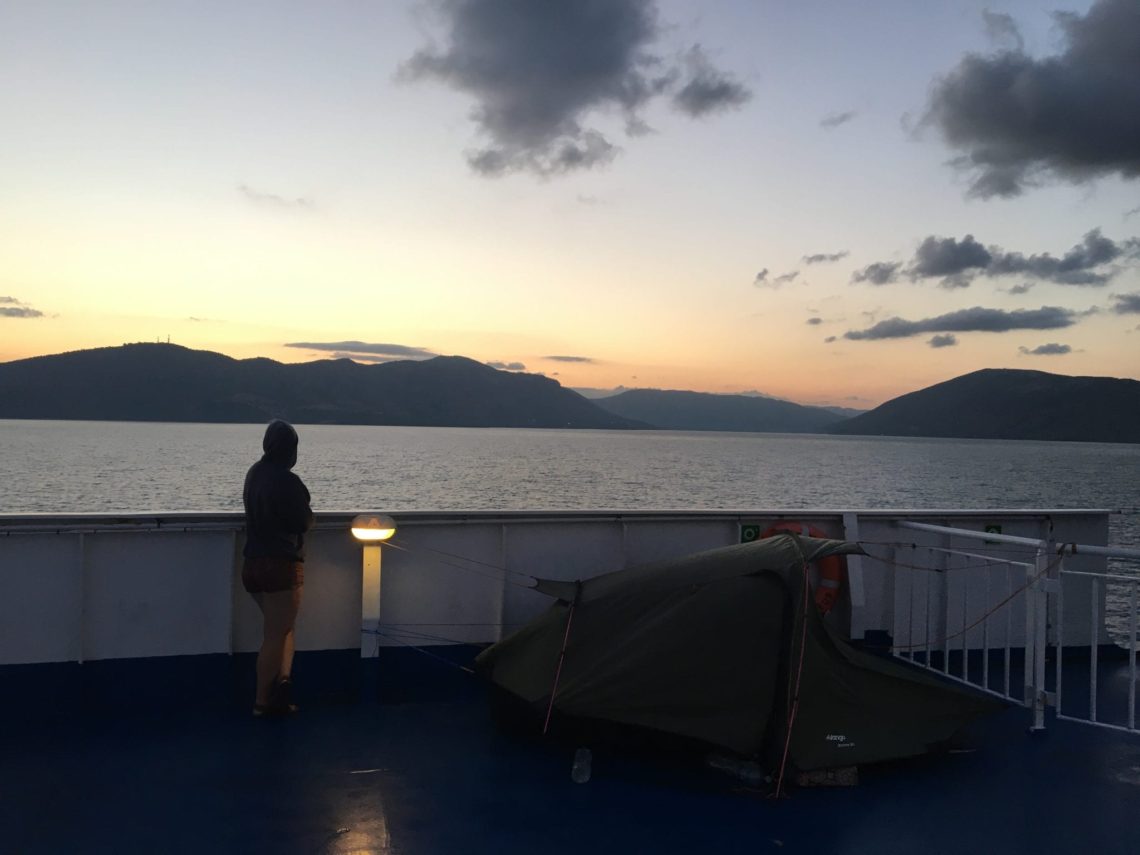 A quick disembarkation later and we had arrived in Greece! The hills on the horizon were certainly an intimidating sight, but we tried not to worry as we would be getting the bus to Athens for our next ferry.. Won’t we? A quick pedal to the bus terminal and some incredible Greek (hand gestures mostly) from Gemma, we were on the next bus to Athens!

Our Last Pedal South (Ever?)

As soon as we stepped outside the bus station in Athens, we knew there was a mistake made along the way. This was not the kind of neighbourhood you wanted to get lost in, with now knowledge of the local language or the surrounding area. Thankfully it was Google Maps to the rescue, and we began our cycle towards the port town of Piraeus. All was going well, until the first corner.. As we turned the literally the first bend from the bus station we found a pack of (what has to be assumed to be stray) dogs waiting for us. The next 20 minutes would be spent pedalling frantically and dodging our legs out the way to avoid being bitten by these dogs. Maybe they were just playing a game, but we weren’t interested! After a further 30 minutes pedalling through some of the less desirable parts of Athens, we arrived at our AirBnb, rabies free and ready for bed. A quick bite to eat and off to bed to end our southwards journey to the heaven on earth of the Greek islands. 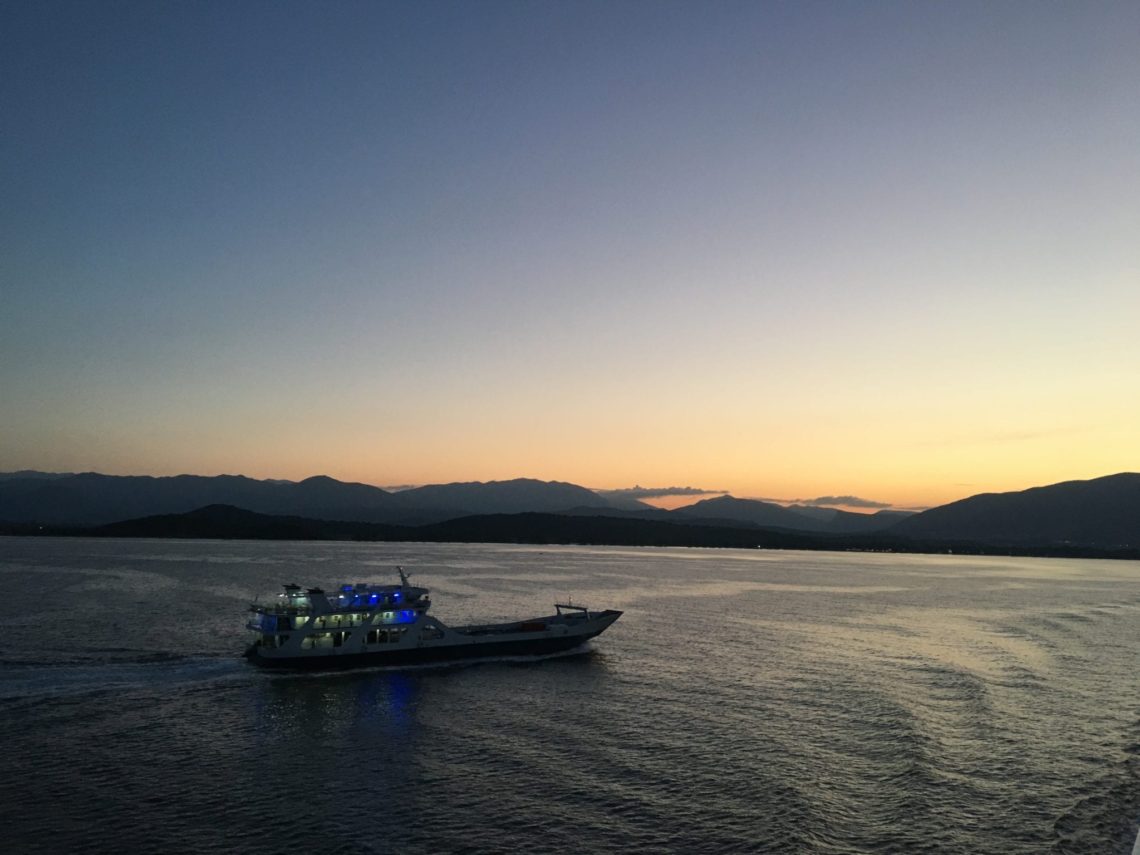 The main thing we have learnt from this part of our voyage, is just how resilient, independent and flexible we can be when faced with a problem. We are much more capable than we give ourselves credit for, and I say “we” to include each and every one of you too! What we did wasn’t rocket science, it was simply remaining calm, analysing the situation in front of us and being open to all of the possible solutons, even if it means adjusting your plans to suit. Remember, life begins at the edge of your comfort zone, so get out there and get a little lost. You will always find a way back home.   Campbell

The Giants Causeway is one of the greatest sights

Finding a wee bit of Solitude in everyday 🧘🏼

This is your Monday reminder to stop worrying abou

SAVE THIS POST FOR A GREAT VANLIFE SPOT The past

The Colosseum, Rome 🇮🇹 ad/pr One of the mo

We have made it to Northern Ireland in Ellie 😁

Tips for visiting the Edinburgh Fringe (including