For backpackers visiting Australia, Melbourne is always at the top of the list of cities to visit. The majority of Australian adventurers usually hit up this beautiful city as their first stop-off point, before exploring the of the rest of this enormous country. Whether it is the amazing history, comfortable climate, friendly people or just how homely the city feels, Melbourne is an incredible place to live. Despite how popular a destination it is, there is still a trivia Melbourne has to hide, with plenty of interesting facts just waiting to be discovered. Here are the top interesting Melbourne facts that you have probably never heard of. Along with all the other things you need to know before going to Australia, this guide will give you all the unknown facts you need to know about Melbourne.

Download our FREE full guide to arriving in Melbourne and getting yourself set up. This includes how to setup a bank account, superannuation and so much more! 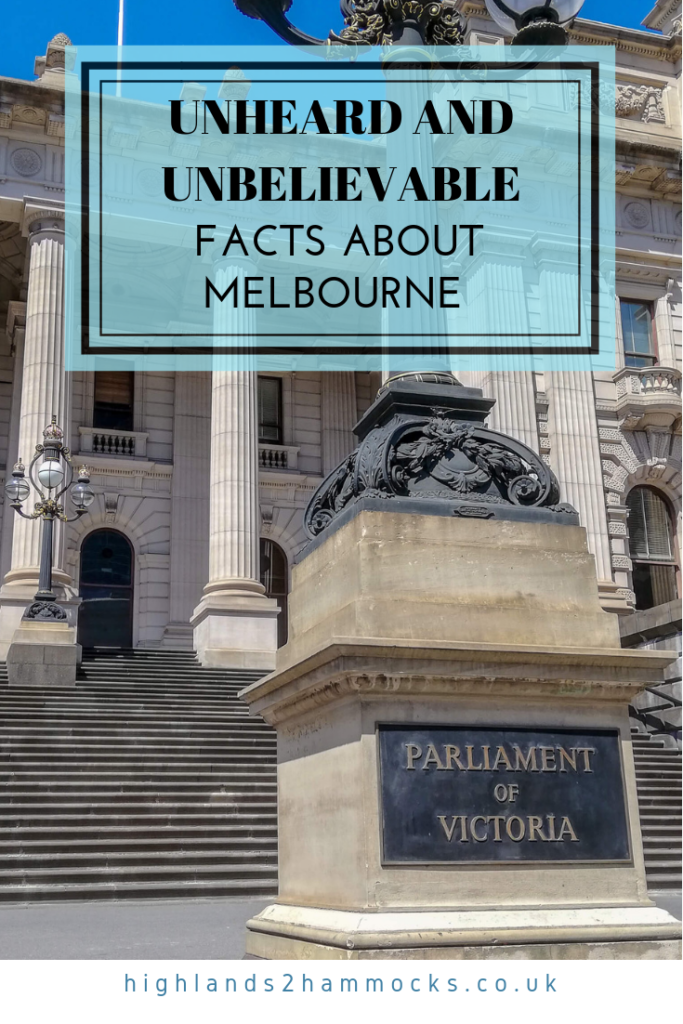 In this article, we will discuss all of the points listed below. These will be each discussed in greater detail later on in the article.

Second Most Liveable City in the World

One of the most interesting pieces of pub trivia Melbourne has to offer is its global ranking for most liveable city. This city actually used to be THE most liveable city in the world, however as of 2018, Melbourne slipped to number two. Don’t let this put you off however, as  it is still easy to see how Melbourne achieved this impressive ranking. A huge range of cuisines to choose from, huge investments in public transport and public spaces, an incredibly affordable social scene and the highest minimum wage in the world, Melbourne has it all! You will never find yourself bored in this, ever-changing city, with new pop up bars, free live events and beautiful weather to match it all. Definitely a place to settle down, once the travel-bug has worn off.

The next piece of unbelievable Melbourne trivia is its incredible social scene. As I said, you are never going to be bored in Melbourne. In fact, it is actually the world leader in the number of bars, restaurants and live music events per capita! The investment the government puts into giving back to the community is simply astounding. We spent 4 months scouring the city for the best bars, restaurants and live music venues and we could continue for another 4 months. There is simply too much to do in Melbourne in just one year, which is why so many backpackers always end up coming back for more. You don’t become the most liveable city in the world for nothing!

The next of the interesting facts about Melbourne gives thanks to the hard-working citizens of Melbourne’s past, whose hard-work and persistence gave way to a lot today’s workers rights. The most famous of these rights is of course the 8-hour working day. In the 19th century, the stonemasons of Melbourne had enough of the harsh working conditions they were subject to. A force wide strike forced the rulers at the time to take their voices seriously, agreeing to allow for shorter working days. Eight hours of work, eight hours of recreation and eight hours of rest. In the end this led to the amazing work life balance that Melburnians (and the majority of the world) enjoy today.

The first question that I normally get asked about Australia, and Melbourne in particular, is always “isn’t it really expensive there?”. The answer is (unfortunately) yes. Yes it is.. One of the definite fun facts about Melbourne (and the rest of Australia too) is that Australia has the highest minimum wage IN THE WORLD! The current minimum wage is $18.93 (2018). This is one of the many reasons why it is so popular with backpackers on working holiday visas. With this in mind, if we compare the price of your average beer in London to that in Melbourne, in terms of how many hours of work it costs, Melbourne is actually cheaper than London! In fact, during happy hour around the city, the pints are so cheap in relation to the minimum wage that they are cheaper than majority of the UK!

The Ex-Prime Minister was a World Record Holder

Once the Richest City in the World

At the beginning of the 18th century, something incredible happened in Victoria. The small port colony that had just recently settled made a life changing discovery – GOLD! Millions of dollars (billions to today’s value) worth of gold was discovered in the land around Melbourne. Just after Victoria was declared an independent colony from the overlords of Sydney, this incredible discovery was made.. What a coincidence! It is thanks to this goldmine and subsequent economic boom that Melbourne is the thriving metropolis that we know today.

It is the Ex-Capital of Australia

Leading on from this separation of colonies and gold rush in Melbourne, when Australia finally became the united country we know and love today, a tough decision had to be made: where should the capital city be? Sydney, the original colony and largest city? Or Melbourne, the wealthiest and most diverse city in the country? Well, this argument just couldn’t be settled, so instead the government decided to do something quite unprecedented. They were going to build a new city to act as capital, equal distance between the two great cities of Sydney and Melbourne and away from the coast, protected from invasion. For the 28 years that it took to suitably build and equip this new city, the temporary capital and government resided in the beautiful city of Melbourne.

Hidden Bars around the City

The Melbourne nightlife is famous across the world, mainly for its weird and wonderful bars spread out across the city. One of our favourite discoveries when it comes to this bar culture, is the fascinating story of the hidden bars, scattered throughout the city. During the prohibition days of the 20th century, it was law that bars could not serve alcohol past 6pm. What a load of rubbish, right?! Well fear not, the ingenious Melburnians all agreed upon a solution and did something about it. Come 6pm, the bars shut for the evening and everyone went home.. or so it seemed! What in fact happened, was all the residents simply entered a separate area of the bar through a secret “trap-door” to continue the evenings celebrations. Some of these bars still reside around the city, hidden in plain sight behind bookshelves or fridge doors, just waiting to be discovered.

The Victoria Gold Rush and its Dominating Skyline

One of the reasons Melbourne is the wealthy, historical and beautiful city that it is today is thanks to a certain event that happened a couple of hundred years ago. During these times of wealthy and prosperity, the gold-miners of Ballarat did not agree with the way the colonial forces from the United Kingdom dealt with taxation, licensing and general ruling over the area. A bloody conflict broke out on the 3rd December 1854, named the Battle of the Eureka Stockade, resulting in the deaths of 27 people. Later this rebellion eventually resulted in the right to suffrage being granted to certain groups of society, and is thought of as the birth of Australian democracy. In 2006, construction was completed to the Eureka Tower, an architectural feat of almost 300m in height (at the time the tallest residential tower in the world), in commemoration to the Battle of the Eureka Stockade. The gold crown at the top resembles gold rush of Victoria,  and the red stripe resembling the blood that was spilled over it.     A funny story that we were told by our Melbourne tour guide in relation to this battle was a soldier taking part in the Eureka Stockade went home to his wife each evening before returning to continue the protest the next day. One day his wife had enough of waving him off, fearing that today would be the day the British attacked the stockade, so that night while he slept she burnt all of his trousers to prevent him from leaving the next day. Unable to go to protest in just his underwear, we had no choice but to stay at home the next day, December 3rd 1854. This would be the day the stockade was attacked, killing the majority of the protestors. A rather well-timed burning by the wife!

Download our FREE full guide to arriving in Melbourne and getting yourself set up. This includes how to setup a bank account, superannuation and so much more!

So there you have it, nine amazing facts abut Melbourne to love. If you are planning a trip to Melbourne soon, make sure you check out the rest of our Australia content to make the most of your trip. If you have recently visited Melbourne, let us know how you enjoyed it in the comment section below. What was your favourite part of the city? Did you try the famous coffee? What street art did you see? Let us know down below. Also remember that sharing is caring, so be sure to let all your friends and family know about this guide to Melbourne so they too can plan their own trip. Save this guide for later by Pinning it and make the most of your adventure to Melbourne when you visit. If you found this guide useful, make sure you check out the rest of our Australia content so you can plan your trip to its maximum potential. Catch up with us on our social medias and tag us in your Melbourne photos so we can share them with our community.     Now Read: 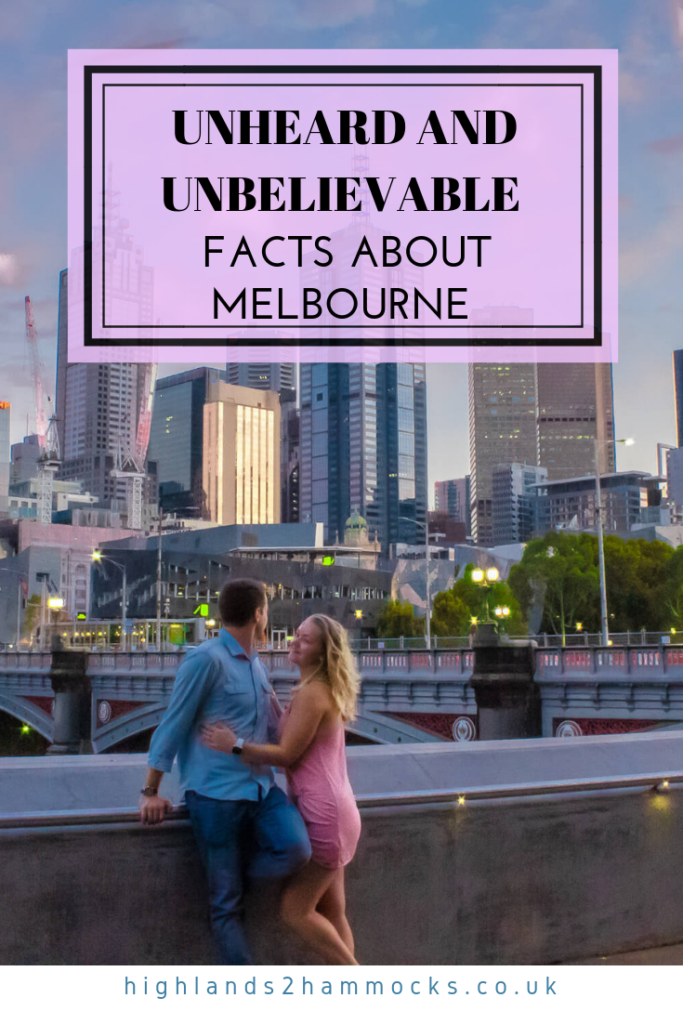 The Twelve Apostles – The Complete Guide